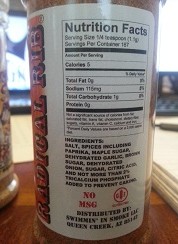 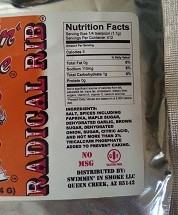 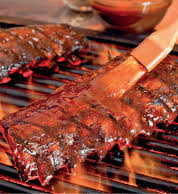 Use this seasoning on pork ribs or lamb chops. Try it on steaks, ham, sautéed onions & mushrooms, wild game and even beans. It is a Memphis style rub (sweet with a little heat).

It is made pride right here in the USA! We hand selected the freshest and finest ingredients. So every time you get a bottle it will always taste fresh and not taste bitter or stale.

This is a sweet rub with a little heat.

This was actually created for a BBQ catering company that wanted Mike to make them a rub for Memphis style Pork Spare ribs. It was used on the first day and had to be diluted the next day because it was too hot. Well, Mike went back to the kitchen and took out some heat and added more sweet and BAM!

Use this rub on pork ribs or lamb chops. People have used it on steaks, ham, sautéed onions, wild game and even beans.

Mike’s favorite thing to put it on is St. Louis Style Spare Ribs.

“BBQ enthusiasts from all over the country come here to measure their products against their peers,” said Roy Slicker, association president. “It’s a competitive field with top-notch products, and a NBBQA Award of Excellence medal is quickly becoming one of the most coveted awards in the foodservice industry.”

In addition to the annual competition, the 2015 NBBQA conference featured an array of valuable seminars led by well respected BBQ standouts. Attendees learned from the best at presentations such as Where Barbecue Means Business, Creating Sauce and Rubs, Marketing & Promotions, Science of Meat and Taste and many others.  Larry Winget, TV personality, author and BBQ enthusiast, served as the conference’s keynote speaker.  The conference also featured an impressive gathering of grills, smokers and BBQ equipment and accessories at the trade show as well as a celebrity steak cookoff competition.

Founded in 1991, the National Barbecue Association (NBBQA) is the only trade association dedicated to the business of barbecue. The NBBQA’S goals are to promote the recognition and image of the industry, facilitate effective networking and alliances of industry resources, provide informational and educational resources that foster new business opportunities for its members. For more information, visit www.nbbqa.org.

There are no reviews yet.

Only logged in customers who have purchased this product may leave a review.